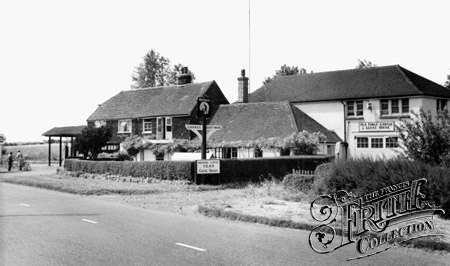 As far as we know, the oldest part of this building dates from the end of the eighteenth century, and it is likely that the forge was added in the early nineteenth century.

In the late eighteenth and early nineteenth centuries the road behind this building was the turnpike road from Lewes to Battle and would have carried quite a lot of traffic including the stage coach from Brighton to Hastings via Lewes, Horsebridge and Battle. In 1814 there was much excitement when the Emperor of Russia, the King of Prussia and their entourages, en route from Portsmouth to Dover, were entertained at Amberstone Grange, about 3 mile from here.

In his book “Our Parish”, first published in 1894, Thomas Geering describes the blacksmith as “a round-eyed, fierce, wild looking man, rarely out of his leather apron, but, withal, as gentle as a lamb; he who made his own songs, and sang them to tunes, to the stroke of his hammer, as sparks flew out of the kitchen window”. This may have been Thomas Humphrey, who is recorded in the censuses of 1841 and 1851 as smith here. Following him were William Peters in the 1860’s and early 1870’s and Richard Miller from about 1874 to 1905.

By 1887 Richard Miller had a small shop, and by 1891 this was also a Post Office. This business was taken over about 1906 or 1907 by Charles Purser, who seems to have given up smithing in the late 1920’s, probably because of the decline in horse-drawn transport.

By 1932 he had given up the post office business, and the shop probably closed in 1935 or 1936. The new owner, Geoffrey Tanner, had the shop demolished and the other buildings extended, re-opening as the Olde Forge Filling Station in 1936 or 1937. It was also a guesthouse, and the register started in 1938 is still preserved.

During World War II, under the ownership of Mrs Sidebottom, it continued as a guesthouse and restaurant, many of its customers being passing troops, wounded servicemen from Hellingly Hospital, or the staff of the Heart of Oak Benefit Society who had been evacuated to Herstmonceux Castle. It also played a part as a Red Cross post as a sewing and knitting depot. The garage and filling station remained until relatively recently, but now the whole premises are given over to the Olde Forge Hotel .